Miles Baker is a student of his horses. He spends at least 12-14 hours each day with the 10-15 horses he is currently training. And that’s just his half of the equine athletes he and his business partner have split to work with. Although Baker has been horseback and working with young horses as long as he can recall, he doesn’t want to be known solely as a horse trainer, although that is his primary profession.

“I want people to be like ‘that guy’s a horseman. He can start colts. He can ride a cutter. He can ride a reiner. He can train a rope horse.’ I just want to be known as good at anything that involves a horse,” Baker said.

Baker started riding on his dad’s southwest Oklahoma ranch and feedlot when he was just a young kid. He’d ride pens, rope and treat sick calves. Later, he rodeoed at Oklahoma State University and continued to train some horses in college, until he returned back to the family ranch, where he said training horses works really well with the cattle operation.

He uses the wide-open spaces to his advantage when training rope horses. He said giving a horse a job typically makes them a better horse, and there are always plenty of jobs around the ranch.

“Getting out of the arena and doing a job on them is good for their minds. It is a good tool that I have access too, whether they go on for roping or not they are just good horses in general,” Baker said. “I try to ride all of our young horses outside when they are in their 3- or 4-year-old year, even when we start roping on them. There’s always jobs that need done outside – checking cattle, roping cattle, doctoring wheat pasture cattle, so there is something that has to be done and it is a good opportunity to get horses out of arena and do a job on them,” he said.

A critical part of his horsemanship skills is keeping his horses in good shape nutritionally. He learned about the Vitalize® equine products from a friend who uses the VitaFerm® products on his cows. He now feeds only alfalfa and a program of Vitalize products, allowing him to save money on grain.

Baker said his program consists primarily of Vitalize® Digest More® Plus and Vitalize® Alimend®. He counts on Vitalize® High Performance and Vitalize® Equine Gel when he needs additional assistance.

“If I have a program, it is like a common ground, a set regimen that everything gets. And I know if I need to go up or down. That’s why my program consists of Vitalize Alimend and Digest More. On the 2-year-olds if they stay fat as a tick, they don’t get the Alimend. They only get the Digest More. Then, if I have a horse I want to do a little bit better, I can step them up with the Equine High Performance. With having the Alimend and Digest More as the common ground, it lets me know if I need to do more or if I can do less,” he said.

Although he doesn’t use the Vitalize Equine Gel daily, he said it is definitely one of his favorite products to get him out of a bind.

“We’ve had some young horses and hauled them. They get off feed and water when the get on the road. Then, we’ve got some horses in and changed their diet, and they go off feed or get a little colicky. It seems like I can give them that Equine Gel and they are back on feed and water really quick. The Vitalize Equine Gel has saved me some trips to the vet,” he said.

For Baker, one of the newest Vitalize Ambassadors, the Vitalize program is an important part to his horsemanship success. He encourages others to find the Vitalize products they like and develop a program that works for them, too.

“The thing that keeps me going is you never quit learning, and that is part of the horsemanship side for me. You never stop learning about the horse, mentally, physically. Whether it’s training them, feeding them, just being around them. I take a lot of pride in the riding side of it and the feed program side of it and I’m constantly just trying to become a better horseman You have to continue trying to do what’s best for the horse and you can’t do that without a good feed program,” he said.

Many people judge their worth by a dollar amount or even the accolades they have won. That would be easy for Casey Deary to do, also. With more than $3 million in earnings and a long list of achievements in the reining horse arena, Deary is worth a lot. However, he knows his value isn’t […] 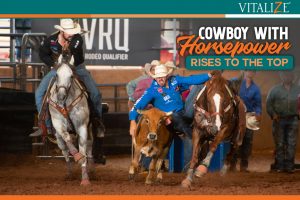