When fractions of a second matter, there’s only one things that is important to world champion steer wrestler Tyler Pearson: a confident horse. He relies on his equine partner to have confidence, speed and heart. That’s why he’s one of the best steer wrestlers in the business as well as one of the best horse trainers around for the sport.

“The horse is everything in my sport. The key is they have to have the confidence to do what is right; when you give them a pattern, they need to know their job,” said Pearson, 2017 PRCA World Champion Steer Wrestler. “The ones that love it are the ones that are good at it and end up winning and will feed off of it.”

Pearson didn’t start out at world champion caliber. In fact, the son of a roper admits he didn’t even like steer wrestling at first, but it was what the rest of his friends were doing when he got into junior rodeos and then into high school. He worked harder than the rest, and his perseverance paid off.

“I wasn’t very good, but I didn’t want to be left out. I was long-legged and clumsy. I had to work at it,” Pearson admits of some of his earlier days.

Horsemanship came a little easier than the sport of bull doggin’. His dad was a professional horse trainer – one of the best in the business. Working with horses came natural to Pearson too.

After some success on the high school circuit, Pearson decided he would continue with the college rodeo circuit. That is where the sport turned from a hobby to a passion. Originally, he went to college to pursue a degree in the medical field, but with the time he was dedicating to the sport, changed his major to business. And his business soon became winning rodeos and training horses that could win for others as well.

Pearson encourages everyone who wants to be successful at anything to keep working hard and persevere.

“Work, work, work! You only get out of something what you put into it. Whenever you’re napping and playing Nintendo on the couch, there’s someone out there, working hard to get to where they want to be,” he advised.

Scooter is one of those “once in a lifetime” horses that helped Pearson and fellow steer wrestlers Kyle Irwin, Ty Erickson and Tyler Waguespack post numerous successful runs. Pearson won his first world title on Scooter in 2017. Waguespack won the world title on Scooter in 2018. Scooter has also claimed two PRCA AQHA Steer Wrestling Horse of the Year titles in 2017 and 2018. With the monetary wins Scooter earned for his title, his owners Pearson and Irwin established “Scooters from Scooter.” They donated their wins and challenged their sponsors to also donate to the Watering Seeds Organization, which helps with rehabilitation efforts. Their program provides scooters for mobility.

Scooter is now 16 years old and is in semi-retirement at Pearson’s Oklahoma ranch. He’s a special horse that deserves to be turned out, not run down and put down, he said, and he owes this horse a giant debt of gratitude.

“He’s bought us everything we own,” he said.

Casper, a 12-year-old horse is now the center of attention for Pearson and his traveling partners. Just like Scooter, Casper has the heart, speed and desire to win. When it comes to training a horse for the sport of steer wrestling, Pearson claims he is pretty picky; even if the horse performs well for him, the horse must also work for the others that might ride it in the same performance, meaning the equine partner needs to be resilient.

“They go from dead still to fast to an immediate stop, and then we ask them to do it again,” he said.

Keeping a horse sound and healthy that has that many expectations on it is one reason Pearson has decided to become a Vitalize® brand ambassador. With traveling extensively to get to 85 sanctioned rodeos through the year, and running for multiple cowboys, it is imperative to keep his horses feeling the top of their game with Vitalize products that support digestive and joint health in his horses. He said he can definitely tell a difference in how his horses feel since starting the products like Hyaluronex® and Vitalize Recovery Gel, and they don’t pick through the supplements.

When staying on top of your sport requires heart, confidence, hard work and a horse with the same traits, it’s no wonder that Tyler Pearson is known for the horsepower that he has. From Scooter to Casper and hazing horse Metallica, he’s a dynamic trainer with an eye for the horses that want to work. We’ll be keeping an eye on this cowboy, currently ranked third in the world is his sport. 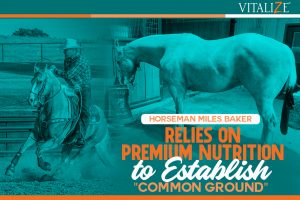 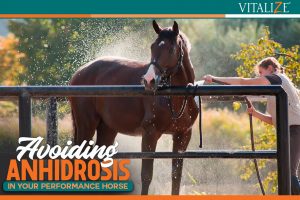 As summer rolls on, temperatures are heating up around the country. Envision yourself riding with a friend on a hot day. After working awhile, her horse has formed a thick foam under the reins, saddle pad, between its hind legs and is dripping from its belly. Your horse, on the other hand, is mostly dry.  […]