Vitalize® Alimend® is a natural product that provides 24/7 stomach comfort for your horses. It contains patented and proven ingredients that work with the horse’s biology in a novel way to improve gastric health. Each ingredient in Alimend has been independently researched and verified for efficacy.

In addition to each ingredient being proven effective, one clinical study on hyaluronan has been completed in horses yielding these results:

“This study provides evidence that gastric ulceration in active horses can be successfully treated with a naturally safe and effective polysaccharide blend of hyaluronan and schizophyllan. Our study reveals that a polysaccharide blend of 240 to 480 mg high-molecular-weight hyaluronan and 60 to 120 mg of schizophyllan administered daily for 30 days demonstrates ulcerative healing. Of the horses treated, 90% showed complete resolution and/or improvement in ul-cerative areas, increased appetite, weight gain, and positive behavioral changes.” (N. Slovis, 2017)

Additional research is currently ongoing. Please check in in the fall for further studies on Vitalize Alimend.

The below products all contain the research-proven prebiotic, Amaferm, and improve digestive health and gut integrity.

Amaferm has over 50+ years of extensive published research and over 111+ university and clinical studies. (Amaferm Aspergillus oryzae fermentation product) is a natural, precision prebiotic to support the horse’s entire digestive system resulting in an increase in digestibility, absorption of nutrients, and Volatile Fatty Acid (VFA) Production. Amaferm has been shown to increase digestibility by up to 17% and absorption by up to 30%.

In the Foregut, Amaferm Works to:

In the Hindgut, Amaferm Works to:

Mannan oligosaccharide (MOS) is a bioactive compound that can be derived from the cell wall of yeast. As a feed ingredient, MOS works to limit pathogens inside the digestive tract. This generally has great benefit to young animals and animals that are under stressed or immuno-compromised. MOS works by attracting pathogens, binding to them, and expelling them.

MOS works exceptionally well with other prebiotics like AMAFERM (Aspergillus oryzae fermentation product). Their synergistic effect comes from their differing modes of action. AMAFERM excels at stimulating the good bacteria and fungi in the gut, while MOS excels primarily at directly eliminating the bad. The result of utilizing them together in the diet is quite synergistic.

To learn more about the products, visit: https://vitalizeeq.com/equine-products/ 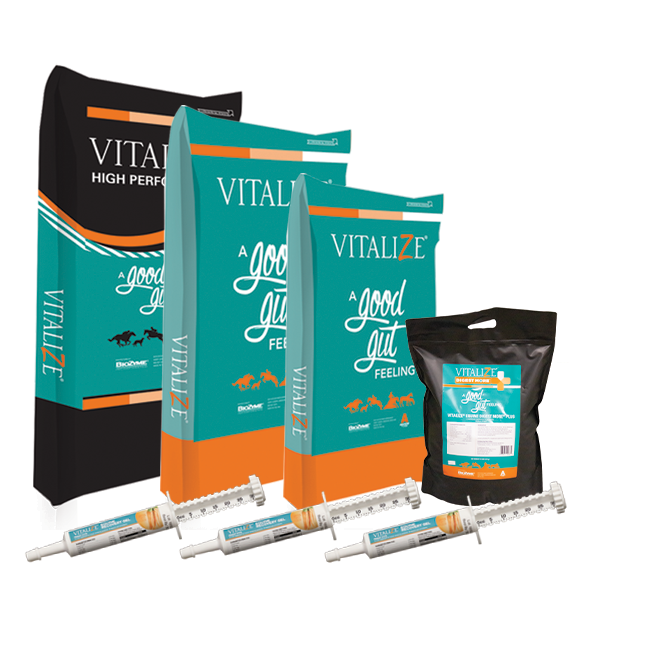