Some little cowgirls only dream of meeting the people they look up to in their sport, watching from a distance and studying their every move. However, one Canadian turned Texan cowgirl set her goals high, worked hard and has shared the arena with those same ladies she watched for hours on end while she was growing up.

“It is so crazy to me that I am able to compete alongside them because they were like superheroes tome growing up. I would lay in bed and watch YouTube video after YouTube video of Jackie Hobbs(Crawford) or Lari Dee Guy and Hope Thompson, JJ Hampton, Kelsie Chace, I looked up to them for so long. I would go in the garage and rope the dummy and just practice and want to be them so bad,” saidShelby Boisjoli, the 2021 Reserve World Champion Breakaway Roper.

“The weirdest thing was figuring out that they’re just people. I put them on this huge pedestal thinking they are superheroes. It means the world to me because every single one of them has had an impact on my roping and my career. Jackie and Lari Dee have helped me so much. JJ will be the first one to send me a text if I’m in a slump. It’s crazy how much they have taken me under their wing. Honestly, I ‘m still starstruck by them because every single time they back in the box if I am in the building, I will stop and watch them. It is hard to believe I’m roping at the same level as them.”

Boisjoli has earned her own way to superhero status in the world of breakaway. Growing up on a ranch near Alberta, Canada, the middle of three sisters credits her dad with everything she knows about horses. She started roping in the branding pen and got involved in rodeo in junior high school. It was then, she knew she would some day move to Texas to pursue her rodeo dream.

While in junior high and attending national rodeo competitions, she recalls the team from Texas always excelled and they were way bigger than her small Alberta-based team. She knew even as a young athlete that Texas was calling her name.

“I knew I wanted to be one of the best at the sport and I knew Texas was where I needed to be. I couldn’t get here fast enough after I graduated high school,” she said.

She took her horse and moved south for college, and continued buying, trading and training horses, something she really enjoys. Her two current horses that she mainly competes on are both mares that she bought and trained, something that gives her immense satisfaction. Root Beer, her black mare, bought in college asa 2-year-old. She also trained Ona, the mare that was named the Nutrena Breakaway Horse of the Year in 2021. She is currently bringing along a gelding, Little Punch, who she is equally excited about.

“It really means the world, and it is the cherry on top to win with one you train yourself. I know it takes a lot of time get with a horse you buy as well. I feel it is equally a big feat and rewarding. I just love my horses and that I know their every move and they know my every move because we’ve been together from the start,” Boisjoli said.

Boisjoli said the biggest challenge for a breakaway roper is keeping her equine partner sound. Many ropers, including herself rely heavily on their horses for the majority of their run, so horse health is paramount. Even with multiple horses, the riders get accustomed to a favorite horse.

“I’d say the equine athletes are 80% of our run every time so we have to make sure our horses are feeling good. I put too much on my horses all the time,” Boisjoli said.

She started noticing commercials for Vitalize® equine products at the NFR and noticed her boyfriend, World Champion Tie-Down Roper Haven Meged, was feeding Vitalize to his horses.

“I have been using Haven’s Alimend the last year now. I started sneaking it in their grain,” she laughs.

Boisjoli notices a big difference in horses that use the Vitalize® Alimend®, a natural product that supports gastric health and GI tissue in horses. She said some of the younger horses coming out of the reining and cutting barn shave been on some unhealthy things to keep up their weight. When those horses come off the drench they are on, they can go downhill really fast.

“When they get on the Alimend, those horses do better. Or horses that are drawn up or hound gutted, I like to put on the Alimend, it seems to drop their guts, and make them look a lot fuller,” she said.

She has also recently discovered the Vitalize® Equine Gel, a gel to help get horses back to feed and water after trauma, illness, performance or stress.

“I noticed a huge difference with the Vitalize Gel. We drove four hours to Houston, four hours to Mercedes, and my horses didn’t want to drink. I gave them each a tube of the gel, and we drove from Mercedes to Bryan another five hours and they each guzzled a full bucket of water. I’m a huge fan of that now!

Both the Vitalize Alimend and Equine Gel contain Amaferm®, is a prebiotic designed to enhance digestibility by amplifying the nutrient supply for maximum performance. It is research-proven to increase intake, digestion and absorption.

Boisjoli takes nothing for granted. She gives a lot of credit to her family for her start and their unwavering support. She knows her horses help her succeed with every run, and she will continue to put her mentors on a pedestal. However, she wants to be that type of role model for the next generation of rodeo cowgirl.

“I want to be what Jackie and Lari Dee and Hope and JJ were for me, to somebody growing up like they were for me. They were such a huge part of my life. They have helped me so many ways inside and out of the arena being a good person, bringing me closer to God, so many things. I just want to be that for little girls. Somebody that makes them want to get up every day and work toward something bigger,” she said.

That is what make Shelby Boisjoli a great Vitalize Ambassador. She knows it is important to care for her horses and give them that #goodgutfeeling, and she knows care that comes full circle. 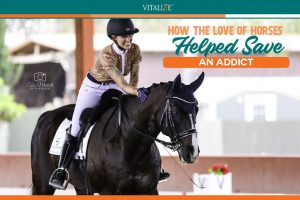 Show me a little girl who’s ever been in love with a pony, and I’ll tell you the tale of true love. The bonds formed between horse and rider are often so strong that nothing can tear them apart. After all, they are a team – partners in all they do. That was true for […] 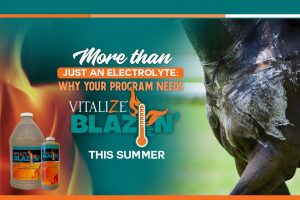 It’s no secret that performance horses and those used for daily work sweat. Important minerals are lost in that sweat, which is why horse owners and trainers rely on electrolytes to replenish the minerals, especially in the heat of the summer months. However, that isn’t always getting to the root of the problem–heat. Electrolytes might […]