Yost, a fourth-generation rancher and horseman from South Dakota, has been riding horses as long as he remembers. He watched his dad and older brothers break horses, and he got his own start on ponies when he was between 9 and 10 years old, and he spent three years working on ponies before he got to start his first horse.

“I was fortunate. I got to start some ponies for some neighbors. With the idea that if I was interested, and I did something wrong, those ponies would make me pay for it, but they weren’t full size and going to run a 9-year-old kid down. I just stayed with it because I was extremely interested and ate it and drank it and breathed it. It was a good experience for me because I did do stuff wrong. I got kicked multiple times, and I got kicked in the belly a few times, and ran through fences and the whole deal. You know, I learned a lot from those ponies,” Yost recalls of his humble beginnings.

Just three years later, he moved up to training horses, and at that point he was aware of the danger zones of the horses. He was also aware of the rewards, and he hasn’t looked back.

Horses have been a part of the Yost family’s Broadaxe Ranch since his great-grandfather settled it in 1930. The family uses horses on the ranch, and Yost said the ranch wouldn’t be the same without them. He relies on the ranch as part of his real-life training program.

Yost did take some time away from the ranch during college. He earned a bachelor’s degree in human exercise science because it intrigued him; it has also helped him fill some holes in his horsemanship. He still started colts for customers during college and said he always felt a calling to make this his profession, which he has.

”Like any business it has its ups and downs, but we’ve been very, very fortunate and we’ve had a lot of great people to work with, whether it were customers or clients or partnerships. At the end of the day, even those times where it was very discouraging or I’ve had an issue with a colt, and it made me second guess what I was doing, I still want to go back and work that colt. When my mind wanders, it seems like it always wanders back to the horses,” he said.

Yost initially conducted 25 to 30 horsemanship clinics across the United States each year. Then, in 2014 when his dad’s health took a turn, he refocused his efforts closer to home. However, alternate tools like DVDs and social media became available as to not let him lose his stride. He currently has three or four training DVDs available and uses Facebook, Instagram and YouTube regularly to communicate with his clients. Yost has more than 55,000 followers on Facebook, a much larger audience than what he could reach giving clinics every day in a different location.

He said social media has allowed him to move at hyper speeds and share tips and resources with his clients and others as they pop into his head. He enjoys the logistics and the reach he gets with the new venue.

It was also the combination of social media and BioZyme® Area Sales Manager Brett Tostenson who led him to learn more about the Vitalize products that help with the #goodgutfeeling in his horses. He was doing research to help fill some holes in his training.

“I don’t feel like our program is ever complete. Even with the best horsepower, best feed and best training there are still holes to fill,” Yost said.

He had two high-end horses he was training that he felt like he was losing ground within terms of digestive health and performance. Yost wasn’t really surprised due to the amount of stress these horses endure while they are training.

“There’s not going to be a period of their life that is going to be more stressful on them than what they spend here. The side effects of the stress often impact their immunity, which impacts their absorption, which snowballs and just turns into a train wreck,” Yost said.

Before the train wreck, he filled those holes by starting these two high-end horses he was training on Vitalize Alimend®. He could not get these horses’ hind guts to fill in and drop so he started them on the natural product that supports gastric health and GI tissue in horses. Vitalize Alimend provides 24/7 stomach comfort and relieves equine gastric issues commonly associated with training, traveling and performance without altering stomach pH or hindering digestion. Yost said that within two weeks the backs of their stomachs started to drop, and their flanks started to fill in, and the horses started to relax and settle into their training routine. The Alimend was the only change he made.

“That was a year and a half ago. I started with those two horses, and now everything in the barn is on Alimend. I could see a major shift right before my own eyes. It is more enjoyable to train a happy horse,” Yost said.

“I like that the Vitalize products are backed by science, and since I’ve started using Blazin’, my horses don’t stand in the stalls and sweat. We are getting horses ready for a sale the end of the month, and they can do heavy-duty ranch jobs in the heat and still look like good sale horses,” he said.

Regardless of if it’s plugging a hole in the training pen or in the pasture working calves, Yost knows the best way to keep his and his clients’ horses feeling their best is by giving them the #goodgutfeeling from Vitalize. Products like Alimend and Blazin’ are just a few of the of the products with the Amaferm advantage that he uses to help keep his equine partners feeling their best to perform their best. 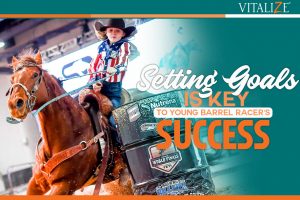 “If you follow your dreams, your dreams will succeed and so will you.”   That’s pretty astute advice from a 9-year-old, but it’s the advice she gives to herself and others that have goals in life. And it apparently works, as Kaysen Scott has followed her own advice all the way to the Junior National Finals Rodeo this past December, […] 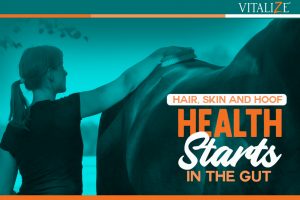 Most horse owners take gut health seriously due to the common challenges that can result from neglecting to care for the digestive tract, including colic, ulcers, weight loss, laminitis… the list goes on. It is no doubt digestive health is vital to keeping your horse happy and healthy, but did you know gut health affects […]