Jan Byyny, professional eventing trainer and rider, recently said, “I think the more you can care for the horses to meet their gut health needs, the better and more relaxed they are going to be when they perform.”

She’s right. Isn’t a healthy, comfortable horse going to be a happier, more competitive animal? Of course, it is! As humans, we can never “give it our all” if we are not feeling well. And the same holds true for animals. Unfortunately, due to conditions endured during competition, such as limited turnout, confined stalls and vigorous traveling, horses are susceptible to digestive upset and ulcers.

Ulcers, a term that has become all-too-familiar in today’s equine industry, are lesions in the horse’s digestive tract. Although common in the sporthorse world, they are not something to be taken lightly, since prolonged ulceration can cause chronic colic and digestive issues, which can be fatal. In addition to the increased risk of colic, if your horse is suffering from ulcers, he or she will also tend to be uncomfortable, grumpy, girthy, unthrifty and perform under expectations. There are two different types of ulcers that can occur in a horse: gastric or hindgut. Let’s explore each type.

A gastric ulcer is a wound on the horse’s stomach lining and is the most common type of ulcer. It is estimated that between 60 and 90% of performance horses have gastric ulcers, according to AAEP. So, whether you compete on a D1 barrel horse or a Grand Prix jumper, odds are he or she is suffering from gastric ulcers.

Why is the statistic so high? Horses in the wild were intended to graze nearly 23 hours a day, where the saliva from constant chewing of forage helped buffer the stomach acid and keep a happy gut. Since domestication, especially for show animals, horses now have less control of their feeding schedule. They typically get 2 or 3 highly-concentrated meals a day, along with hay or grass when we provide it to them. What happens when the horse’s stomach is empty, and they do not have free access to forage? Ulcers.

The gastric ulcers tend to form on the middle to top portion of the stomach, where the acidity is more basic. Some people theorize that they form from acid “slushing” around in the stomach, such as during exercise, creating sores as it hits the fleshy top-portion of the stomach lining. However, the exact causes of these ulcers are still unknown.

Hindgut or colonic ulcers, are located further down the digestive tract in the intestines or “colon” of the horse. These ulcers are less commonly studied, but it is known that they are more common in horses that are already suffering from gastric ulcers.

The cause of these ulcers, too, is not well understood, but there are two common theories for why they form. First, it is debated that these ulcers form due to an overconsumption of NSAIDs, like phenylbutazone (bute), which block chemicals called prostaglandins. Prostaglandins disrupt the mucous production and normal function of the digestive tract and can ultimately aid in the development of ulcers there.

Another theory is hindgut acidosis—when a horse is fed too much starch and is unable to process it before passing it onto the hindgut. This phenomenon drops the pH of the gut, produces lactic acid and possibly forms hindgut ulcers.

How to Prevent Ulcers in Horses

The most important thing we can do as responsible horse owners to keep the risk of ulcers and digestive upset down is to maintain a consistent schedule for your horses. Should changes need to be made, implement them slowly. These routine changes affect the gut directly, which also affects the immune system and all other functions of the body.

Life as a performance horse is not easy – there are many stressors that can trigger the onset of ulcers. So, we must minimize any anxiety that we have control over, especially during times of competition. For example, if your horse hates the horse next to him or her, find another stall where he or she can be happier. Another example is to set up the stall in the same way that it is done at your home farm. Horses recognize when things change and are affected by it, whether they display it externally or not.

Another valuable management practice for preventing ulcers is feeding a supplement like Vitalize® Alimend®. It contains MHB3® Hyaluronan and Lion’s Mane extract, which have both been proven in clinical research studies to have gastroprotective and healing effects.

Alimend is unique in that is does not change the pH of the stomach, nor does it prevent acid secretion like many other products do. Because of this, digestion is not negatively impacted, which decreases the chance of colic. Instead of suppressing acid, Alimend’s formula has a mucoadhesive effect that lines the stomach and is designed to both repair and maintain the integrity of the GI tissue.

While there is no surefire strategy for preventing hindgut ulcers, keeping the gut consistent is the best way we can try to avoid these problems. Vitalize products that contain BioZyme®’s precision-based prebiotic, Amaferm®, increase digestibility and absorption of nutrients and help keep the gut stable. 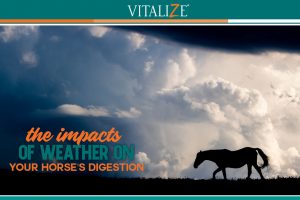 There has always been a common myth that when the weather changes, the instances of colic in the barn increase. But is this true? Can a simple change in temperature, barometric pressure or location affect your horse’s health? A recent study says it may. The study, conducted at the University of Pennsylvania in 2017, stated there […] 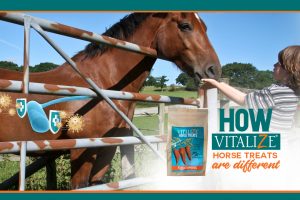