Show me a little girl who’s ever been in love with a pony, and I’ll tell you the tale of true love. The bonds formed between horse and rider are often so strong that nothing can tear them apart. After all, they are a team – partners in all they do. That was true for 4-year-old Elyse Hart, lifelong Californian who first discovered her love for horses at a birthday party where pony rides were given. She became obsessed, but that obsession would not become her last.

Her parents started her in riding lessons soon after that birthday party, and Hart was enamored with horses. She said her love for horses grew because they offered more than other activities.

“I got involved with riding when I was four. I was a little horse crazy. I haven’t really played a lot of other sports, but for me it is different than if you are playing with a soccer ball or baseball bat. Your partner in this sport isn’t an inanimate object. It’s something with a beating heart and air in its lungs and love in its heart and sometimes thoughts and opinions. I think that is what made it so different for me,” Hart said.

Hart continued to ride, and when she was 10, her parents purchased her a 2-year-old mare that she could help break and train. However, as her tween and early teen years set in, her interests turned away from the barn and to booze.

“I didn’t look forward to going out to the barn and riding after school. I was tired and cranky and going through puberty. Then I started drinking,” Hart recalls.

But the substance abuse didn’t stop with alcohol. She admits to starting using marijuana when she was in the ninth grade. Though her parents sent her to an emotional growth boarding school, she knew she was an addict, and sobriety was not her friend for many years.

The peaks and valleys of sobriety and abuse were rampant. Heroin was the next drug of choice. With no smell, she could sometimes trick people into thinking she was sober, but not for long. Through her journey, one constant remained; her parents never sold her mare, which remained at a schooling facility and got plenty of TLC from other kids who like Hart had the passion to ride.

“I would go back intermittently and see her, but I was never able to stay sober for very long. It was like 60 days here, three months here, four days. But I am happy to say I am sober 6 ½ years now.  Addiction is a disease. I’m not so concerned with how I got it, but I’m more concerned with how I’m going to treat it,” Hart said.

Hart gives a lot of credit to her love of horses and their unconditional love back for helping her reach her ultimate goal of long-term sobriety. She knows the horses aren’t the only thing keeping her addiction at bay, as she also attends AA, has attended therapy and has great support of family and friends; however, she does know that she has to be on the top of her game when around the horses.

“I can’t imagine my life without horses. They are like my medication. It’s my happy place. It’s somewhere I’m comfortable being present. When you are on a horse, you can’t be any more present than that, right? You are trying to use every part of your body and your mind to command them to do something, especially in dressage. It has been so healthy for me. It’s not a bowling ball you put in your closet. You make a friend when you have a horse, and Bob is that to me. Bob is my heart horse 100%. He is such a special horse,” she explained.

Bob is the horse she purchased nearly two years ago with a partner, who was also looking to buy an additional horse. At first, Hart was leasing Bob, which with monthly lease fees, stabling and other expenses was not economically feasible. However, Bob also had some challenges from his past that he had to overcome, and Hart was there for him just like he was there for her – a perfect match.

Bob had a collateral ligament injury before Hart started riding him. She was doing research on both joint health, to help prevent too many injections for Bob, and gut health to keep him in top health. That is when she discovered the products from Vitalize®. She saw an offer for a 21-day trial for Hyaluronex® Joint, and with the research findings she read, decided to try the all-natural product that supports horse’s joints and soft tissue health throughout performance, recovery and aging.

“I saw a difference in Bob when I started using Hyaluronex. He wasn’t unsound, but it literally changed his gait. He became a lot lighter on his feet, a lot more fluid in the shoulder. I was able to see the difference and was really pleased,” Hart said.

In just 16 short months of riding and training together, Hart and Bob were able to progress. They moved from intro level competitions to the Prix Saint George – competing at that level for the first time in October 2021. The duo had a good day – not maybe the best – but to reach that level as quicky as they did was a good feeling for Hart, who loves to ride with her handsome Hanoverian partner, Bob.

“I love the feeling I get when I hear the bell ring when it is time to head down center ring with my partner. The connection you get to have. Bob is ready to go. That horse knows when it is a show. Bob loves to show. It is fun to be all dolled up when he’s in his element, and I’m along for the ride,” Hart recounts.

Not long after that first Prix Saint George competition, Bob was cast in his stall in mid-November. With severe injuries, he spent a week at the equine hospital. The prognosis was grim.

“We got a really, really guarded prognosis for him. They said that maybe after 4 to 5 months that he could be tack walked – maybe. That this might permanently change his gait. They were saying things like fibrosis, range of motion might never be the same. I was totally crushed,” Hart recalls. “I don’t know if it was from the Hyaluronex, but I think it helped. He did not have a tear, a strain a separation, a break, nothing. But he did have deep muscle trauma from laying on his side for so long, so no blood and oxygen went to his muscles.”

With the accident in November, they predicted he might be walking under saddle by May. Hart is happy to report she’s been riding him again, and that’s he’s sound. He’s walking, trotting, cantering, doing changes and performing pirouettes again.

“He was on rest for two months just in the stall and that is like ulcer-town when you have a horse just standing in the stall. I was so grateful I had Vitalize ® Alimend ® and could feed the stress dose of that and not worry about his gut health and him getting ulcers. So, Vitalize has helped us a lot! Both Hyaluronex and Alimend are amazing for horses when they are healthy and when they are rehabbing. It’s pretty amazing, “ Hart said.

Vitalize Alimend is another natural product. It supports gastric health and GI tissue in horses and is powered by Amaferm®, a prebiotic designed to boost animal resilience to challenges. It is research-proven to improve gut integrity and immune response.

Hart also credits Alimend for the overall health of Bob. When she first got Bob, he suffered from allergies that were treated with shots nearly weekly. Since going on the Alimend, he no longer has to receive these allergy shots, because Hart believes the Alimend has improved his overall immune response.

Not only is Bob recovering from injury and taking things slow, Hart also had an unexpected injury shortly after Bob’s. She was kicked in the stomach by a different horse, which caused internal bleeding. Emergency surgery resulted in removing her spleen and 2/3 of her pancreas. However, she only took about 50 days off from riding, because it is after all, her happy place.

With the results that both she and Bob are seeing, and the steady rate of improvement, Hart said they plan to compete again for first time in June.

Hart fought through her drug addiction and alcoholism with her obsession of horses. Equine therapy helped her focus on dreams and goals she never thought were attainable and pursue even a better life than she could have imagined. Not all obsessions are unhealthy. The one that started with a birthday party pony ride has proved to be a life saver and helped form the equine duo of Elyse and Bob. That’s the tale of true love.

The holidays will be here before you know it, and this is the perfect time to get your best equine companions something festive. Vitalize® Horse Treats’ new holiday packaging was recently unveiled and is now available for a limited time. These low-sugar treats feature prebiotics and natural flavors for a #goodgutfeeling in every bite. Vitalize […] 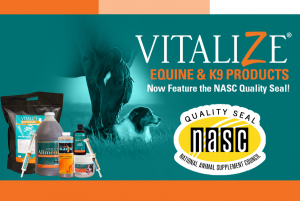