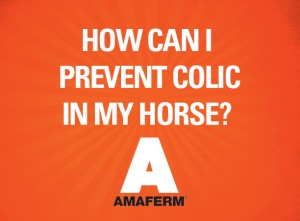 Colic is the number one medical cause of death in horses. There are approximately 2.7 colic surgeries performed every hour in the U.S. equating to a total economic loss to the horse industry of more 144 million dollars. Colic is defined as an attack of acute abdominal pain localized in a hollow organ and often caused by spasm, obstruction or twisting. Since colic is a broad term for abdominal pain there are as many as 70 different causes. Most colic episodes are of unknown origin or in other words, we don’t know exactly what the cause was. However, colic is often a direct result of diet or subsequent changes in feed management, and is often preventable.

The most common causes for colic are sudden changes in feed, high sand intake, moldy feed/hay, dehydration, intake of foreign objects, stress, acute weather changes, high grain diets, intestinal parasites and ulcers. The reason that horses are more susceptible to colic is due to the anatomy of their large intestine. They are three major flexures (i.e., sternal flexure, pelvic flexure, and diaphragmatic flexure) or (hairpin turns) that are particularly at risk for blockage.   Once one or all of these locations are blocked, gas produced from fermentation causes an increase in pressure and severe abdominal pain.

Owners can minimize the risk of colic by keeping grain meals small or non-existent, feeding numerous times a day and remembering to make any feed changes gradual. Ensuring your horse isn’t dehydrated and has access to water, especially in the winter when water freezes, as well as having access to plenty of hay and exercise will also pay preventative dividends.

Horses get some nutrients and almost all their energy from the fermentation of forage materials in the hindgut. Up to 70% of the horse’s energy is derived from short chain fatty acids produced by fermentation. When large carbohydrate-rich meals (grain or sweet feed) are eaten, some of the carbohydrates can escape digestion in the small intestine, spilling over into the hindgut where it disrupts the balance of microbes. The chemical changes that result from this imbalance lead to rising lactic acid levels (acidosis) and an increase in toxins caused by the death of some hindgut microorganisms. These conditions put affected horses at a higher than normal risk for colic.

Research has found that there are microorganisms that raise lactate levels and others that utilize lactate. A low level of lactate is always present in the hindgut, but there are variations in hindgut pH as bacterial microbe populations increase and decrease in response to dietary modifications. An acidic shift favors the growth of acid-loving bacteria, while other microbes die in the same conditions. Lactate utilizing bacteria can play various roles in the return to normal hindgut conditions and therefore prevent upsets like colic.

Amaferm helps out in several ways:

Click here to learn about the complete line of Vitalize Equine products that all contain Amaferm and can help improve the digestive health of your horse. 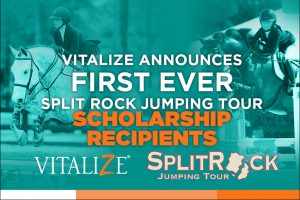 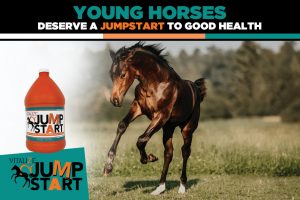