Many people judge their worth by a dollar amount or even the accolades they have won. That would be easy for Casey Deary to do, also. With more than $3 million in earnings and a long list of achievements in the reining horse arena, Deary is worth a lot. However, he knows his value isn’t just financial rewards and accolades.

His faith in God is what has guided him through his successful career in the reining horse field. He averages 10 to 12 hours a day, five days a week on a horse, but he puts his faith and family first. The horses are merely a vehicle to help share his testimony.

“God put a love of horses in me from an early age. The horse is a tool to help share our faith with others,” he said.

Deary and his family have had ample opportunity to share their faith along their journey, both at their local church and at cowboy church services on the competition road. Based out of Weatherford, Texas, he successfully competes at National Reining Horse Association events across the world. His list of accomplishments is impressive:

However, with all these titles and honors, he will tell you one of his biggest accomplishments is simply keeping four children alive in a horse facility. As a father and husband, those two sons and two daughters who are following in his horsemanship footsteps are his pride. They travel as a family, train and ride as a family, something Deary is proud of and doesn’t take for granted.

The people are just part of the winning equation. He also knows keeping his horses healthy and on top of their game is the other part of being successful. As one of the newest Vitalize® ambassadors, he knows how important his equine partners’ digestive health is to their overall health and happiness.

“One of the things that I’m most proactive about is keeping my horses’ stomachs as healthy as possible. I had one horse on a stomach medication, so decided to try the Vitalize Alimend. That horse looks great, rides good and coat looks good since giving it Alimend,” Deary said.

Vitalize Alimend® is a product that supports gastric health and GI tissue in horses and may relieve occasional gastric issues commonly associated with training, traveling, and performance. Alimend is a unique blend of: MHB3® Hyaluronan, H. erinaceous (Lion’s mane) extract, and Amaferm®, a prebiotic to improve digestive health and gut integrity, keeping animals healthy and performing.

Deary describes another horse he has with numerous allergies and a decreased appetite. For that mare, Deary tried the Vitalize Equine Gel – a nutrient and prebiotic-rich gel that gives immediate support to the horse’s digestive and immune systems. He soon noticed a change in her appetite and well-being.

“She went from having a very poor appetite to an extreme increase in her appetite after I gave her the Vitalize Gel. She looks better, and she is riding better. I now give her the gel regularly,” he said.

While the horses can’t always tell us how they feel, a great horseman like Deary can read how they feel and adjust accordingly. That is how he has risen to the top of his game. We are proud to have a man of faith and a man who cares enough to give his horse the #goodgutfeeling with Vitalize as part of our Team. 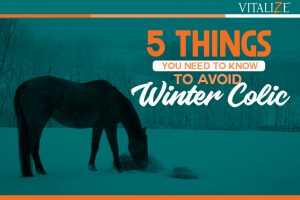