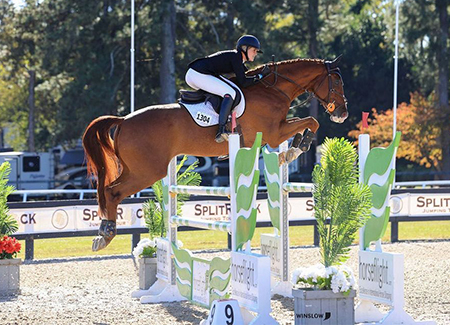 “I’ve seen really good results with Vitalize® Blazin’. My jumping horse is a big, lazy horse and just everything about him is slow. I’ve tried so many energy products just to give him a little more oomph, and some things will work a little bit and some things don’t work at all, but Blazin’ has worked really well on him. He responds super well to it, and I’ve actually used it in all different types of weather. In the hot weather, it gives him some extra energy and helps him recover so much faster after rounds and between the first round and the jump off. In cold weather, it gave him extra energy too. It just gives him a little bit extra fire, and overall makes him feel better. It works very quickly, about 24 hours to kick-in. I give him one or two pumps on top of his feed morning and night, and he eats it great. He’s kind of picky, but he does really like it, which is good. I feel like I have been able to jump him in bigger classes because of it. It’s helped him reach his potential better because he has enough energy to get around the big jumps with increased stamina.”