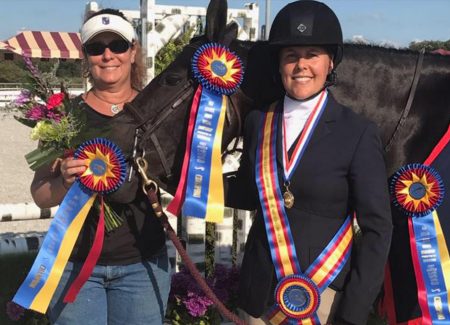 “Rain On Blu SSF aka Newton (black horse) I bred and raised, and he was Zone 5 Adult Amateur 36-49 champion 2017 and won many other championships, has been on Vitalize® Alimend® since 2017. I feel it’s helped his overall health by protecting his gut. Kobe was completely new to showing and had never even been ridden English until April 2018. He had some rough Western training in his past and would stress quite a bit when asked to work. We had used Omeprazole with success on him. However, it was not something I wanted to continue using, so I put him on Alimend knowing it had helped Newton. Alimend has continued to keep Kobe feeling good and striving to work and win in a much more relaxed way. He completed his first show season with many championships and year end circuit championships. I am grateful to Vitalize Alimend for making such an amazing product that not only helps my horses, but gives me the peace of mind that they are able to work at their best free of gut issues!” ⁣